In the early hours of the 8th of November the Vilamoura and Quarteira area suffered unheard of rain causing serious flooding in some parts. The next day the results were clear. Worst was by Browns the Sports Club, along Avenida do Parque, (south side) and Palmyra at Vila Sol. We heard of several Vila owners around Browns who’s underground garages filled completely righting off a Mercedes AMG, a BMW sports bike, a BMW 323i etc. N & M has been busy with insurance Companies and loss adjustors for clients ever since.

There is a 2 m deep drainage ditch which runs south from the EN125, past Browns along the south side of Avenido do Parque and then across towards the sea. Unfortunately as development progressed roads were built to cross it and at these points the large ditch becomes a much smaller pipe for the width of the road, effectively creating a series of damns. These dams over flowed causing the flooding.

Here is a movie of the next day… 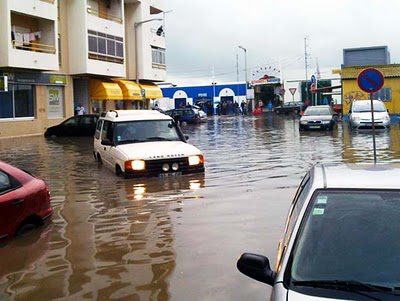 The following week a tornado cane on from the see near Alvor and caused much damage around the Silves area….

For those non resident owners of properties hopefully their property management Company will have reacted and checked them out, informed them and taken appropriate action. For any poor souls who have no one to watch out for them we hope they escaped unscathed. Water damage, particularly of the dirty kind can do awful damage if action is not taken quickly!